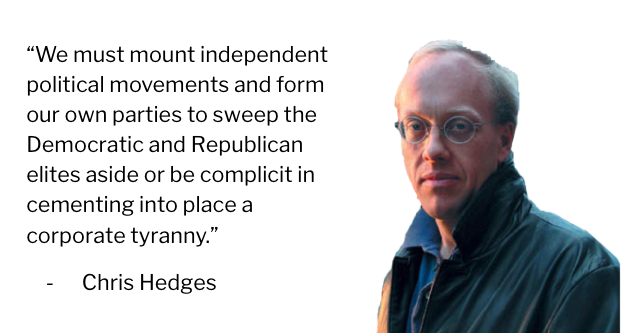 Today I have the privilege of announcing that Chris Hedges, one of the greatest dissidents of our time, has endorsed the Movement for a People’s Party!

Hedges is a Pulitzer Prize-winning journalist and New York Times best-selling author. He was a foreign correspondent for The New York Times for 15 years, where he served as Bureau Chief in the Middle East and the Balkans. He covered wars in Argentina, El Salvador, Nicaragua, Bosnia and Kosovo, where he saw first-hand the devastation wrought by American foreign policy.

In 2002 Hedges was awarded the Amnesty International Global Award for Human Rights Journalism. In 2012 he successfully sued President Obama for overturning the Posse Comitatus Act, which prohibits the use of the military as a domestic police force. He holds a Master of Divinity from Harvard and has taught at Princeton and Columbia. Today he teaches college courses to inmates at the New Jersey State Prison and hosts the Emmy Award-winning RT America show On Contact, where he interviewed me about our movement this summer. Please chip in to keep our movement growing strong.

Chris joins many progressive luminaries who are endorsing our call for a major new party. Just last week, the Labor Fightback Network and several labor leaders joined our Labor Community Campaign for an Independent Party with Socialist Organizer. Together we are building an independent wing of the labor movement that represents labor’s greatest break with the Democrats in years. Click here to endorse this historic campaign.

The Democratic Party is relentlessly driving home the importance of our work. Chuck Schumer has given conservative Senate Democrats permission to confirm Brett Kavanaugh to the Supreme Court. The entire Senate Democratic caucus recently gave the Republicans permission to fast-track confirm 15 of Trump’s federal judges for lifetime appointments. Last month the DNC secretly reversed a ban on taking fossil fuel money, only to be caught by journalists.

Just this Thursday, the Democrats barred thousands of independents from voting for Cynthia Nixon, Jumaane Williams, and Zephyr Teachout in New York by holding a closed primary and setting the deadline to register as a Democrat on October 2017, nearly a year before the vote. In a repeat of the 2016 primary, Governor Cuomo’s Democratic administration knocked thousands of others off the voter rolls.

Instead of embracing the progressive policies that would give the Democratic Party the best chance of taking Congress and statehouses this November, the party continues to prioritize sabotaging progressives over winning office and resisting Trump. Even Democrats who ran on single payer long enough to win their primary, like gubernatorial nominees Gavin Newsom and Andrew Gillum, are now dropping their support.

At the DNC’s summer meeting in Chicago, the party took several steps to expand and consolidate its power over the 2020 presidential primary. The party moved to eliminate caucuses, which accounted for more than half of Bernie’s state wins in 2016. It rebuked progressive demands to abolish superdelegates, moving them to the second ballot at the convention where they can continue to slant the primary. It preserved the use of joint fundraising agreements, which Hillary used to launder money to her campaign and take over the DNC. It approved a rule allowing the DNC to block candidates who have not been “faithful” Democrats from running. It kept nearly a hundred lobbyists on the DNC. And it did nothing to extricate corporate and billionaire money from the party, preserving rampant corruption. If you’ve seen enough, chip in for a genuinely progressive party.

On a personal note, Chris is one of the individuals most responsible for my journey from establishment politics to the Movement for a People’s Party. Few people give greater meaning to the words, “The pen is mightier than the sword.” It is an honor to have his support and yours.