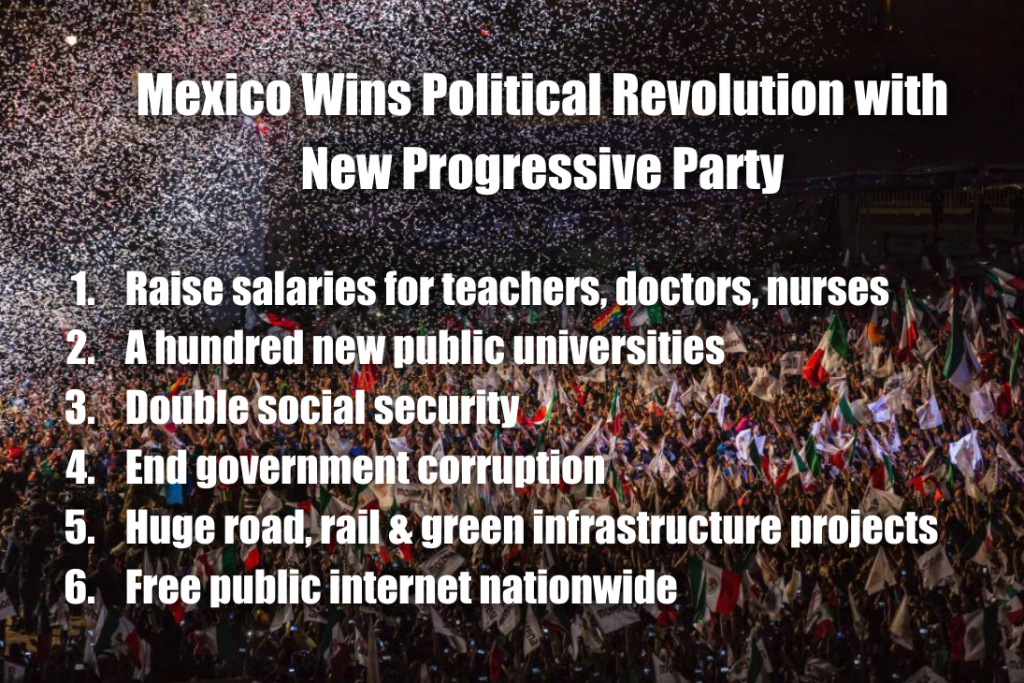 Please enjoy the December edition of our monthly newsletter, where we update you on the movement, current events, and how you can get involved.

● Democrats take back the House of Representatives but the blue wave is a corporate wave. As a result of the party’s primary rigging, only two progressives unseat establishment Democrats in Congress in the 2018 midterms. Find MPP’s analysis of the midterm results here.

● Donald Trump endorses Nancy Pelosi for Speaker of the House. The Democratic Party and its billionaire donors threaten to pick an even more conservative Speaker if the few progressives in Congress don’t back her too. Two weeks after being elected, Ocasio-Cortez and other progressives endorse Pelosi.

● In a powerful display of the party machines’ ability to absorb progressives, the few progressive Democrats in Congress went further than endorsing Pelosi and sought to recast her as a fellow progressive. Alexandria Ocasio-Cortez called Pelosi “progressive” and said she admires the way that Pelosi “comes from a space of activism and organizing.” Rashida Tlaib praised Pelosi’s “progressive track record.” Ilhan Omar said Pelosi “will play an important role in advancing the agenda of progressives.” Pramila Jayapal said that “No one can really doubt Pelosi’s progressive chops.” Every oligarchy needs a vehicle to absorb progressive energy and neutralize movements that threaten it. That is the Democratic Party’s historical function in our country.

● Donald Trump sends the military to the border, clearing them to use force on incoming migrants. Tear gas was fired at civilians in the approaching caravan, a tactic often used by the Obama administration.

● Mexico inaugurates its first progressive president in decades! After decades of trying to reform the establishment parties, Andrés Manuel López Obrador and progressives launched their own party in 2014. Four years later they swept the presidency, legislature, and mayorships. In a transformation that is being compared to the Mexican revolution, the new progressive Morena Party defeated the establishment parties that have ruled the country for a century. Morena began as a Mexican movement for a people’s party. Now the administration, unions and civil society groups are getting to work ensuring that the transformation is implemented.

● A new U.S. Government report on climate change is released, echoing the recent alarming IPCC report and its conclusions that we only have a few years before experiencing catastrophic effects of warming.

● On “Black Friday,” Amazon workers strike in Europe, supported by the Industrial Workers of the World.

● The unjust and illegal war in Yemen continues. Many more EU nations have halted weapon sales to Saudi Arabia. The United States and United Kingdom have yet to withdraw support. Bernie Sanders is making an effort to end the war that has enjoyed bipartisan support from its beginning in 2015.

● Abby Martin, Ron Placone and Graham Elwood join our labor-community coalition. Abby is the host, producer and writer of Empire Files and Founder of Media Roots. Ron is a comedian, writer and producer with The Jimmy Dore Show, and the host of GetYourNewsOnWithRon. Graham is a comedian, documentary filmmaker, and host of The Political Vigilante.

● MPP celebrates its one-year anniversary and participates in #GivingTuesday, a national day of nonprofit giving. Thank you to all who have donated their time and resources to build our movement and have taken part in our campaigns and direct actions throughout the year.

● MPP welcomes several new state and regional leads. These are very important positions that involve onboarding new volunteers and building new locals. Check out the following documents if you are interested in joining them: state lead, regional lead, campus lead. 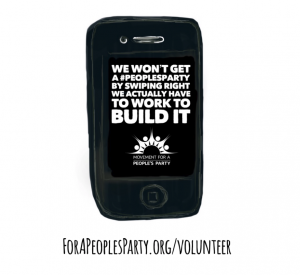 Joining our sisters and brothers in Mexico in building a new party is the only way out of this mess. New parties are succeeding around the world because people want change on a grant scale. Organizing for a true national transformation is a rewarding and fulfilling endeavor.

Join us in building the foundation, even if you just have a couple of hours a week to attend a chapter meeting or conference call. If you can’t volunteer, please consider donating to support our organizing. Or visiting our web store for a button or a tee shirt to wear to rallies. Thanks for being a part of this movement.

Movement for a People’s Party