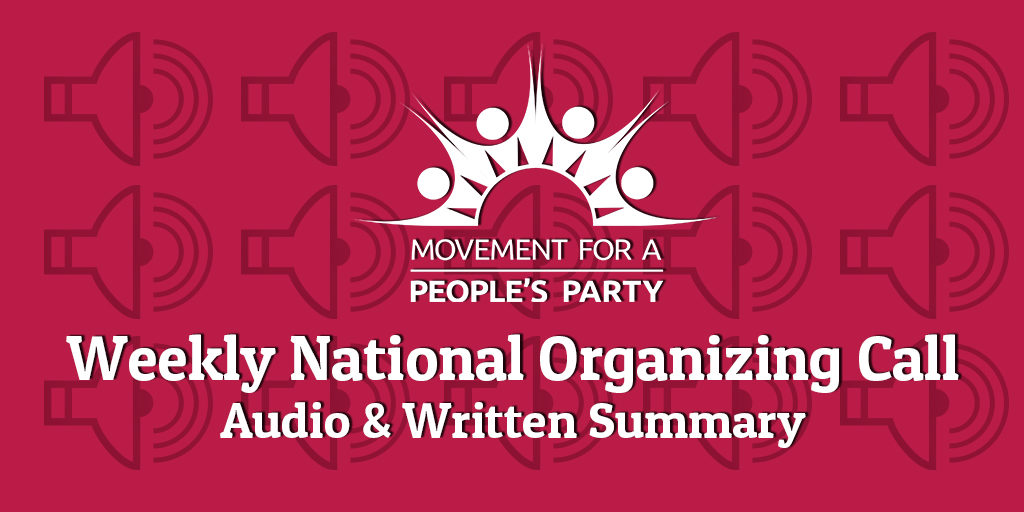 On this week’s call, we discussed the launch of the MPP Platform along with your opportunity to provide feedback, and we had two guest speakers talking about immigration issues from the legal and personal perspectives.

On our one-year anniversary, we have released the Movement for a People’s Party Platform,  along with our signature feature: An American Mission Statement.

Our mission statement gives the country the goal of maximizing human well-being. It also establishes that goal as the guiding objective for the people’s party. All of our platform planks follow from that mission. The platform is a set of 24 principles that organically expound on the Bernie 2016 platform and promote progressive solutions that major polls show the vast majority of Americans want to see implemented. We will have a public comment period until next Thursday’s national call when we will vote on its adoption. You can use this form to make a comment.

The plight of undocumented immigrants continues to horrify progressives. The Democrats are equally as culpable as the Republicans in the failure of the Dream Act, which was introduced in Congress 17 years ago, according to guest speaker Susan Pai, an immigration attorney from Florida who appears regularly in the media. Unless MPP is successful at creating a viable independent alternative, Pai predicted that President Trump will double Obama’s deportation numbers and will win a second term, based in large part on broadening his base through his anti-immigration actions and language. The President gave Congress until March 5 to create a permanent solution for Dreamers. The date is rapidly approaching with no progress in sight. Pai has assembled a package for Dreamers that would extend their status for one more year. Check out her website and follow her on Twitter @SusanPai.

Dreamer Jasiel Lopez, our second guest speaker, is a college student who risks being deported to Mexico, a country where he has family ties but little memory. He spoke of the mental anguish that he and 11 million other undocumented immigrants suffer as they wonder each day if ICE will show up to remove them from the country that most have called home since they were young children.

Listen to the call through the link below.